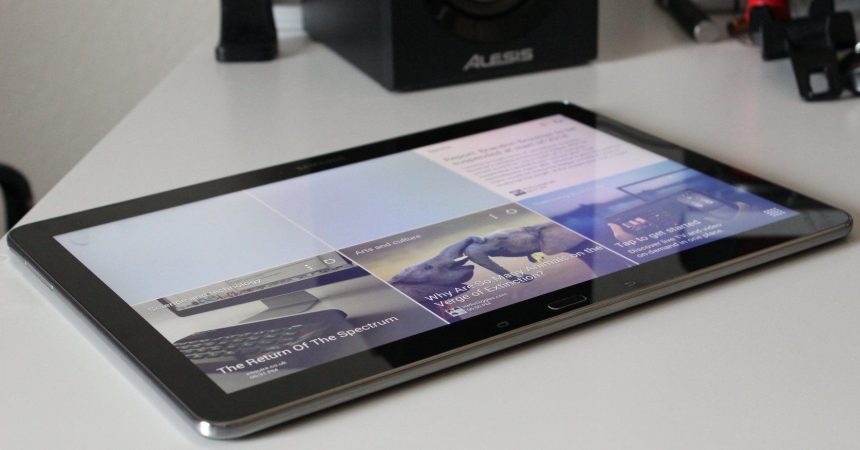 The Note 10.1 2014 edition is an upgraded version of Samsung’s tablet. It is considered to be the freshest in the lineup because of the high-end hardware and the excellent display. The S Pen has also become more usable in the Note 10.1, as well as the multi-window.

Meanwhile, the Note Pro 12.2 continued with the upgrades already started with the Note 10.1. It is larger, both in hardware and software, but there are differences in the processor and other things while still providing the same user experience. 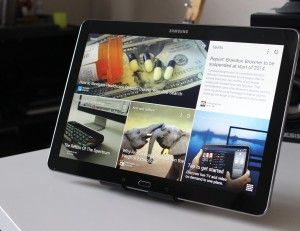 The Note 12.2 has the same faux leather back as other recently-released Galaxy products. It also has a faux aluminum on the sides. The back creaks in some areas and the power button is difficult to find if you don’t really look for it. The other aspects look okay: the volume and home buttons are solid, the button layout retains the typical standard; the microUSB charging port and microSD card slot are found on the right side of the device; the headphone jack is found on the left side; and the power button, IR blaster, and volume rocker are all at the top. Overall, the device looks cheap – a far fetch from the price you actually paid it for. 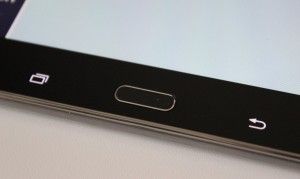 The charging port uses USB 3.0 which allows data to be transferred faster as well as charging to be faster. The other notable difference between the Note 12.2 and 10.1 is the new button layout: the menu button is finally gone and is replaced by the recent apps key. Below are the options you can do with it: 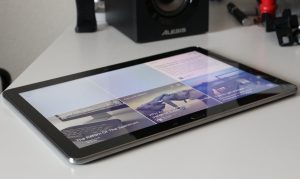 The display of the Note Pro 12.2 is remarkable. The TFT LCD panel is accompanied by a 2560×1600 resolution similar to the Note 10.1. It also has the lowest pixel density of 248 PPI. The text in the Note Pro 12.2 is very clear and sharp, and colors look vivid and very nice. There are also different display options that we have come to expect from Samsung devices, including dynamic, standard, movie, and adaptive display. Adaptive display is the default option.

The speakers are also great that watching a movie or listening to music is a pleasant experience. The only downside is that it is side facing, which is a questionable decision as the first Note tablet got the correct location for the speakers. The speakers are loud enough when not covered, so you just have to ensure that.

The camera of the Note Pro 12.2 is also disappointing. The screen is too large for taking photos and there are too many flashy features similar to the ones found in the Note 10.1. 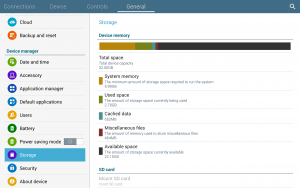 The 16gb internal storage has finally been ditched for a 32gb and a 64gb option. The system occupies 6gb (still a very large space) and pre-installed apps take up 1.5gb. The software bloat still has not changed. The tablet also comes with a microSD card slot for users who prefer to have a huge storage.

In terms of wireless, the 9500mAh battery of the Note Pro is good because it allows you a long time of usage. The device also has the newest version of the Bluetooth (4.0).

The 9500mAh battery of the Note Pro 12.2 is just satisfactory because the outstanding screen uses a lot of juice. The device has about 8 hours of usable time with screen on, watching videos, playing some games, web browsing, responding to emails, and doing some work. Meanwhile, the big.LITTLE architecture just uses up so much battery that it drains even when the device is idle. It loses 3 to 4% of the battery overnight, which is still a pretty low number. You can easily last a day with the device, no worries about that.

There are no major changes with the S Pen. It still looks fragile, it’s light, and it blends well with the device’s design.

The software of the Note Pro 12.2 is similar to the Note 10.1 except for a few changes with the primary interface and the use of Android 4.4.2. The launcher had the biggest change of all as Samsung used My Magazine, which is a Flipboard-powered app that had been added to it. It has a less obtrusive interface and serves as a secondary feature.

On another note, almost all of the Samsung apps in the Note Pro 12.2 is for fullscreen only. These include Gallery, Contacts, S Voice, My Files, Sketchbook, and Action Memo among others.

The Multi Window can now accommodate up to four apps because of the bigger screen size. It is, however, still limited to apps that support the multi window feature. The four apps are aligned to a grid and can be resigned by simply dragging the connection point.

The Note 10.1 2014 had some issues in terms of performance, but thankfully that is not the case with the Note 12.2. Performance is snappy and smooth, even with Air Command which lagged in Note 10.1. When using the multi window feature, the device can still handle it beautifully. Even with web browsing, Excel, YouTube, and the use of S Pen on S Note, the performance was amazing. There’s a slight lag when exiting the apps, but it’s not a big issue.

GPU performance meanwhile did not perform as well as you would expect.

The Note Pro 12.2 is a great device. The size may be a bit too big, but it still depends on the user. Some prefer a large tablet, so that could be the market for this one. It also weighs 750 grams – which is quite heavy (215 grams more than the 10.1 inch version – and is obviously not pocketable. But the tablet is good if you don’t want to use a laptop. It’s easily portable especially if you add a Bluetooth Keyboard and mouse. Gaming is not as good as expected as the performance is rather poor in some games such as Dead Trigger 2. The size is a bit of a factor here too. The price is also not affordable and therefore may not appeal to a lot more people. There are more features such as the four app multi window, but it would still be difficult to justify the big price increase. 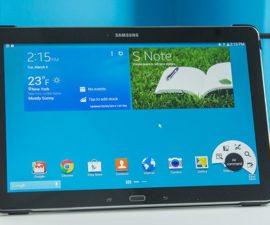 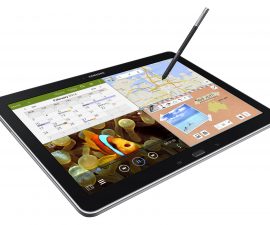