The Fire HD Kids Lightning is a remarkable Amazon device that is available in a six-inch model and a seven-inch model that costs $149 and $159, respectively. It’s the device that officially allowed Amazon to penetrate the tablet market for kids. The Fire HD Kids Lightning is generally a Kindle Fire HD 6/7, except that is has additional features that makes it an ideal tablet for kids. The software layer allowing kids’ accounts is a very useful feature that makes it a family-friendly device. It also has a protective bumper that makes it relatively safer from accidental falls. 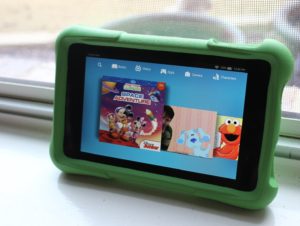 While the kids-friendly feature is not an entirely unique concept (hello, Fuhu), Amazon still did a great job with it. The protective bumper is made from premium stuff (not rubbery at all) and also seems durable. This would make parents worry less about handing the device to their children, don’t you think so?   As noted earlier, the software of the Fire HD Kids Lightning is similar to the Kindle Fire HD, except that it has a software layer for kids’ accounts called the Amazon FreeTime. The device comes with 1 year of unlimited access to FreeTime. This effectively allows the parents to limit what their children can see or access on the device. It has a simple FireOS interface with five categories: books, apps, characters, camera, and videos. The child’s library can be downloaded with any app, video, or book. It’s very user-friendly. A downside probably is that the device does not provide access to Google Play; you can only download or buy apps from the appstore of Amazon. Plus it only has 8 gb of storage that’s not expandable.   Aside from downloadable apps for children, parents can also input goals on the device. For example, they can block the kid’s access to play games until he/she has successfully completed the educational goal for the day. This is a brilliant feature, as parents can ensure that priorities are set for their kids, who get incentives (aka games) as a reward for their learning. Other good points about the device is that its performance is fast and it has a long battery life. That’s more than anyone probably expected.   The device also comes with a 2-year warranty. Amazon will replace the device if anything happens – without question. This no-hassle process is one of the best perks of buying this device.   Is it worth buying? Definitely. It’s the best kids’ tablet in the market right now – the Nabi and DreamTab almost pales in comparison. The software is good, the hardware is good, even the price is good. It’s a tablet fit for the entire family, and worth every cent. Those on a tighter budget can purchase the Kindle Fire HD, but then the additional software layer isn’t there.   Do you have anything to say about the Amazon Fire HD Kids Lightning? Share your thoughts with us!   SC