Home
Nexus player
The Nexus Player: The First of Its Kind, But Still Lacking in Entertainment

Chromecast has evolved to Android TV and the Nexus Player by allowing you to have direct interaction with the device through the removal of the necessity of a so-called middleman device such as a tablet. In simple terms, the Nexus Player is a Chromecast with enough room for further upgrades in the future. 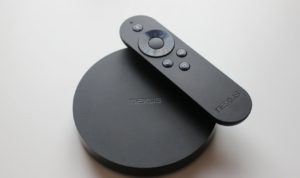 Nexus Player is the first set-top box of Google and the first ever available Android TV box. You can access all the services provided by Google such as Play Games, Play Music, and YouTube, among others. If you are an Android baby, then this device is perfect for you. But then, being the first released product in the set top box market has its disadvantages that will be highlighted later on.

The specs of the Nexus Player include: a 1.8GHz Intel Atom processor with a PowerVR Series 6 GPU; a 1gb RAM; Android 5.0 OS; ports for HDMI, AC, and microUSB; 8gb of storage; and wireless capacity of 802.11ac 2×2 MIMO and Bluetooth 4.1. The device can be bought for $99 while the controller is available for $39.

The Nexus Player simply looks like a rounded little box that bears the Nexus logo. The ports for HDMI, AC adapter, and microUSB can be found at the back to make the device streamlined. Nexus opted for a simplistic design in the device. The remote looks similar to the FireTV’s remote, except that it has less buttons, and contains a microphone, a voice button, the back, play/pause, and home buttons, and the D-Pad. The only downside is that the enter and D-Pad buttons look rather cheap.  The battery compartment for two AAA batteries is located at the bottom half of the back. It’s comfortable to hold the remote because of the slight indention at the back 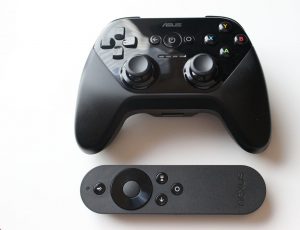 A main issue with the controller is that it refuses to properly reconnect about 50% of the time. When it finally does reconnect, the game controller will not. The good thing is that if you don’t want to buy the $39 controller, you can easily connect other Bluetooth controllers that are compatible with Android.

The biggest downside of the Nexus Player is that it only has 8gb of storage which is not expandable. Of this 8gb storage, 5.8gb is available for you to use. That’s too limited for a device that is created to function for shows and music streaming plus games. 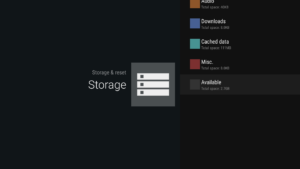 The Bluetooth 4.1 and 802.11ac 2×2 MIMO allows the device to be connected across all wireless networks.

The Nexus Player performed less excellently compared to Chromecast, Roku, and Fire TV and is the most inconsistent. The primary interface is okay and looks like the interface of the Fire TV. It has a section that provides video suggestions for Play Movies and YouTube and the content rotates from time to time. The problem with this is that clicking on a video sometimes shows the video that was previously on that spot. Google should do something about this. 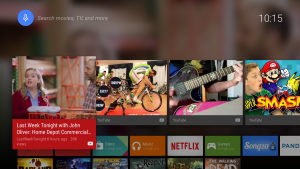 The TV Play Store also has very limited app choices – only 23 in total. There’s only 16 for Entertainment (including Netflix, Bloomberg TV+, and DailyMotion) and 7 for Music (including Vivo and TuneIn Radio).

In terms of the game side, the TV Play Store has 3 categories: TV Remote Games (with 15 titles), Action for Gamepads (with 19 titles), and Casual for Gamepads (with 16 titles). All in all, there are 50 games available for users to choose from. With limited storage, your options are pretty limited. You can’t download two titles that occupies a huge memory space as this will leave you with very few storage. And this is Android TV, not a gaming console – it’s supposed to be entertainment-focused – so the contradictions are confusing.

The voice controls of the Nexus Player works well, and has the capacity to tell you the weather and other similar things. The device is also excellent in terms of brining related content in the search options.

The simplicity of the Nexus Player’s settings and TV interface is a much welcomed characteristic.  All the essentials are included: Apps, Storage and Reset, Date and Time, Language, Search, Speech, Accessibility, Network, Daydream, About, Keyboard, Remote and Accessories, System Sounds, Personal, and Google Cast.

Another possible downside is that Android TV can support only one Google account. You can’t switch between users – the first account set up in it will be retained.

The Nexus Player has great performance. The only issues are the 1gb RAM which could easily age the device faster; the limited storage; and the lack of content.

The Nexus Player – and the Android TV, for that matter – is not yet fully prepared to be sold to consumers. It’s functional, but it lacks a lot in terms of the Entertainment factor. It’s usability for the TV front is also repetitive to the capabilities of Chromecast. Even as a gaming console it’s note very remarkable; you could get other devices such as a SHIELD tablet. Roku is still a better set top box, even without the Games and Play Music.

A lot of improvements can be done with the device. The hardware should be updated to address the issues fund in the Nexus Player, especially because the device itself has a lot of potential to develop.