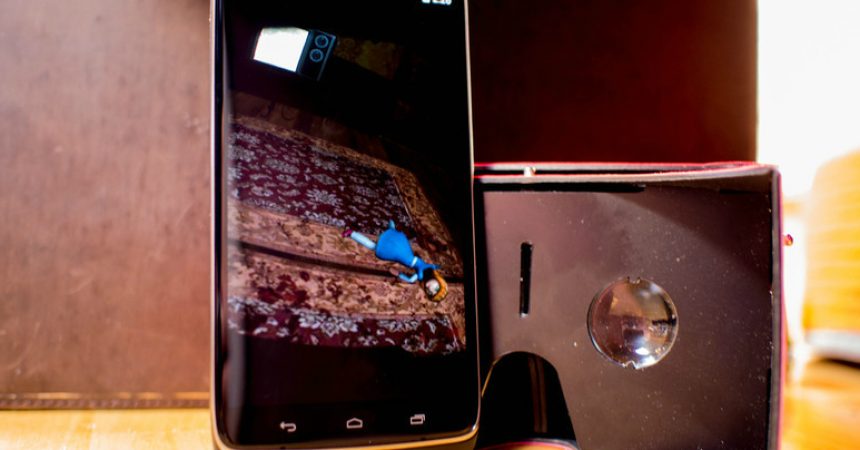 Google Cardboard App is the talk of the town nowadays and there is no doubt in believing the fact that all of you must have already heard about its remarkable abilities to  make your phone a 3D Projector. The most appealing thing about this new app is its bunch of apps , but when there are alot of options there is definitely an issue that arises. However with so many options around everyone have the right to get overwhelmed . There are several apps and games some of them may necessitate full controller but some don’t function as they are meant to be. After going through all the games in the play store, here is the list of few of them that definitely calls for a try out  and these games are as follows

Labyrinth is not one of the most interesting games , it is like get out of the maze game. The right and left controls are there to get past through the gigantic walls made of stone. However these maze can turn out to be pretty tricky, with the gigantic walls all around the player it is very easy to get distracted and lose the way. The only solution to get pass through the maze is either to stick with right or left wall even though if you get stuck at the end it will be worth it.

The cost of this fun filled app is 0.99$ and if you put your headphones on then the experience becomes alot better and more fun

The concept of this game have been used in alot of other games as in the people must have played other dozens of games similar to this one. Although some of them are really fun to be play while others are not but this game is a definite stand out.  In this game there is no usual coaster however the player gets a chance to take a trip through cosmos. The visual quality of this game is downright amazing with vibrant and bright sights along the way of your ride it includes planets and not to forget a space station as well.

This game is one of the most simplest game in which you have to do nothing except staying afloat and collecting the coins in order to boast  your score board. There is a left and right control that helps in the navigation and also makes sure that you don’t fall. A gauge is present in the middle of the screen that assists in letting you know when you are about to trip, the sole purpose of this game is to keep yourself alive. If you are not paying full concentration to the game  you may lose almost everything in a sweep.

The audio department of the game is not very remarkable, however it does help in taking you to the arcade game mindset. This game is simple and fun to play.

This game is very different than the ones we discussed above , it is not only about getting coins or staying alive but it also has a virtual storyline that gives rise to character embodiment. There is no need to move around alot because there is a full 360 degree view that assists in seeing the story the way you want. We came across two of them i.e. Evolution of Verse and New Wave and both of these two were mind blowing. The audio department has also done an amazing job when you put on your headphones the sounds take you in a very different zone transporting you into the game.  There is an option of looking at the video more times from different angles. This game definitely needs to be on your game list because it is worth playing.

There is reason for saving this game for the very end of the list and it is due to the fact that the amount of deep details in this app is very haunting, cardboard app users will definitely be very impressed by this game. This is a horror game manufactured by the Otherworld Entertainment. The setting of this game involves a dark room in which the player is stuck along with tow dolls few furniture items and someone’s  or something else’s shadow. There are no complicated controls , the controls just involve turning it is also a 360 view game just like VRSE but the its audio and visual aspect makes the game more scary. There are few spontaneous elements that happen every now and then adding to the scary atmosphere of the game. This game is definitely one of the best  among all the cardboard games and worth a try.

These five games shows the amount of variety and range in the cardboard app, they are bit different from each other and offers new and innovative experience.