Home
Uncategorized
The Amazon Fire Phone: Big on Gimmicks, Zero on Use 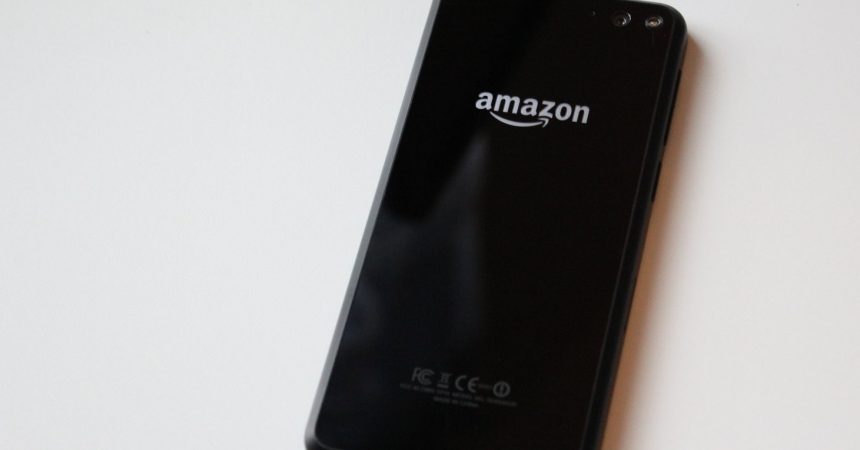 The Fire Phone created by Amazon is, like other Amazon products, all about the services provided by Amazon and the uniform layout. The main point of curiosity for most people is the phone’s four front-facing cameras and the Dynamic Perspective. But most would end up disappointed because these are nothing but a novelty. It’s something you can brag about for a while, but in terms of utility, is practically zero. It’s one of those features that Amazon tries to sell but is not something that you’d really need. These features are just a layer so that the phone sell, and people would have what is really the purpose of the phone, or the Amazon store.

For those who use Amazon, then it’s good, provided that you know how to manage your finances and to not overspend on one sitting. You’d need that skill, because the Fire Phone is a device that makes buying so easy.

With all honesty, the Fire Phone has nothing remarkable when you look at it. It is plain black that is covered in glass at the front and back, has an Amazon logo at the back, and has a small home button. The only intriguing thing about it is the four cameras/IR sensors found in the front panel. The power button and headphone jack are located at the top; the camera button, SIM card slot, and volume rocker are on the left side; and the microUSB charger is at the bottom. 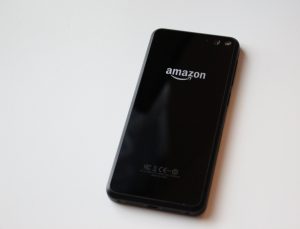 The device has one speaker on the bottom and another one on the top so that you sound is properly released no matter which way it’s facing.

Despite its plainness, the build quality of the Fire Phone is solid. It’s a bit heavy, but it’s manageable. It is almost 30 grams heavier than Nexus 5, and it has a thick frame. The buttons are also stable and the phone does not feel cheap. (It shouldn’t, considering its price). The device has oversized bezels so as to accommodate the four cameras/IR sensors at the back. This is needed for the Dynamic Perspective to work. This is why, despite its 4.7-inch display, the phone’s size is almost the same as Nexus 5.

The Fire Phone has a 720p display that has an okay brightness and good color reproduction. It has managed to have vivid colors without the Super AMOLED level of saturation. The text is also readable. There are no major complaints about the display.

One of the unique designs of the phone is its top and bottom speakers. The device gets reasonably loud so it’s good for watching videos, playing games, and even for notifications. The sound is great in landscape because of the speakers’ orientation. 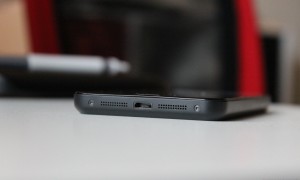 Call quality is similar to most devices and clarity is good. Again, nothing remarkable to say here.

The rear camera is among its best features. Images are taken almost immediately and it’s not problematic even in low light situations. The software, however, is basic – it has the normal camera and video, plus lenticular and panorama camera modes, HDR mode, flash, and that’s about it. 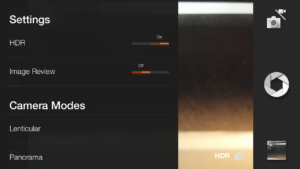 The Amazon Fire Phone has another great feature – a shutter button. It’s something that would be great for all smartphones, but for some reason it just doesn’t exist. Amazon’s shutter button allows you to launch the camera app just by clicking the button once. Pressing it for the second time will take a picture, and long pressing it will open Firefly. The only downside for the shutter button is its location – it’s on the left side of the phone. When you rotate the phone to landscape position, most would turn the phone to the left. This would bring the camera button at the bottom, and it’s not an ideal place especially when you’re using it.

The Amazon Fire Phone is shipped in two variants: the 32gb model and the 64gb model. For the 32gb model, you are left with about 25gb to use, and that is huge enough to download games, apps, and other whatnots.

The Settings menu has a Storage option, which is further broken down into different categories such as Games, Apps, System Apps, Music, Photos, Videos, etc. The phone does not have an expandable storage, but that’s not really a big issue. 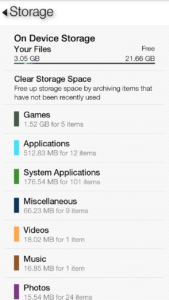 The 2,400mAh battery of the Fire Phone would have been sufficient, but its four front-facing cameras/IR Sensors effectively drains the battery fast. The worst part is that it’s always working (with no option to disable), so your battery life is really low. These four cameras are always tracking your face, and you can also use it to identify things. You’d need a portable charger or an extra battery if you’re an on-the-go type of person; otherwise, you’d have to stay near an electrical outlet at all times. 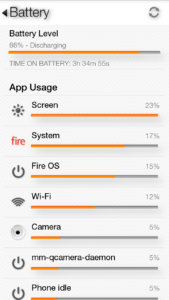 The Fire Phone has a different layout compared to other Android phones. The launcher is a bit of a nightmare especially on a smaller screen. It is based on “carousel”, or what is more commonly known as the recent apps menu of Android. Beneath it is the related content to the app which is highlighted. For example, the camera shows some images from the gallery; the Settings will show recently accessed settings; the Apps/Movies/Music/Books shows the similar content that may be of interest to you. Beanth the related content is a dock that shows the app tray when swiped up and provides you access to the installed apps and cloud apps that are in your catalog.

The Menu is found on the sides of the screen sometimes. The crazy part is that there’s no way to know when the Menu will be displayed. Otherwise, it can be accessed by: (1) swiping inward from the sides, and (2) quickly twisting the phone left and right. These gestures (which Amazon uses for almost everything) are supposedly made to save time, but it ends up being frustrating. The most useful gesture is the swipe from the bottom, which allows you to go back.

The Fire Phone has two features – Firefly and Dynamic Perspective – that really stand out. Dynamic Perspective is the reason why the device has four cameras/IR Sensors. The two cameras serve to track your face, while the two cameras are left available at any time. The Dynamic Perspective is a neat feature, and it’s used to access some on-screen information such as the status bar. It’s tedious – if you need to check the time, for example, you’d have to turn your phone to the left or to the right, otherwise you can tilt your head until the information shows. It’s used for almost all the Amazon-built apps. It makes a simple thing a lot more difficult. It’s “cool use” is very limited: for maps, for games. This feature would have been great, if only Amazon did not insist on making the you use it for almost everything. 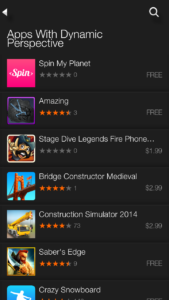 The second standout feature, Firefly, gives you quick access to the things that you want to buy – be it retail items, or music, or movies. The app is easily launched by long-pressing the shutter button. The name comes because of the firefly-like on-screen elements hovering on the screen. The feature will attempt to identify objects near your camera. The problem is that it’s not accurate; it does not recognize a lot of things. On a plus side, it works better when you’re searching movies or music.

The Amazon Fire Phone is basically a layer of “cool” features to mask Amazon’s real purpose, which is to make users spend more on Amazon services. It has some standout features such as Dynamic Perspective, but it’s still just a gimmick and has no real value for the user. It’s also annoying to be used on a lot of apps, making it difficult to use the phone. The Firefly, another standout feature, is also great, except that object recognition is not accurate.

The point is, there’s no actual reason to buy a Fire Phone other than if you’re heavily invested in Amazon products. The phone has some great aspects, but it still doesn’t hide the fact that its primary purpose is to sell Amazon products.

Would you buy an Amazon Fire Phone? Share your thoughts with us!