Home
Goophone
A Review Of The Goophone Note 3 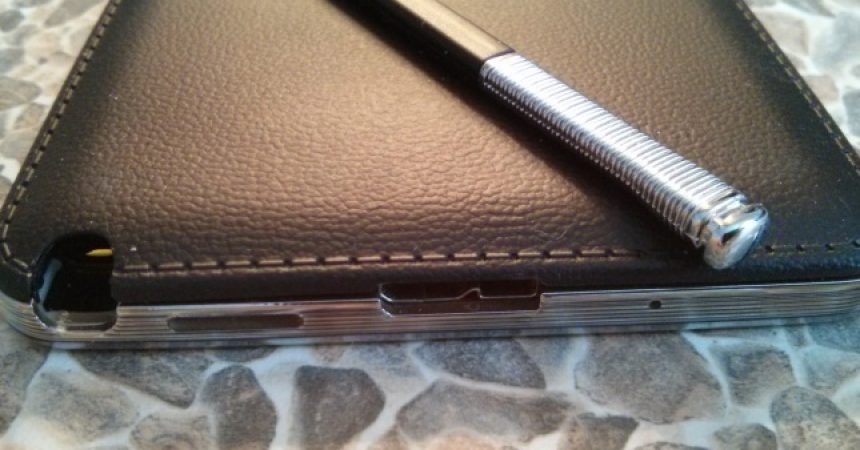 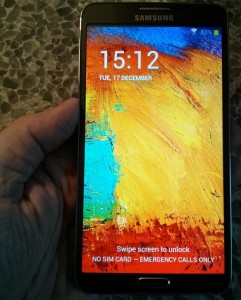 Goophone’s aren’t just devices that look like branded smartphones, they are replicas. The Goophone N3 is a replica or clone of the Samsung Galaxy Note 3. The N3 and the Note 3 are around the same size and shape, the N3 even copies the Note 3’s faux leather back with a Samsung logo. The N3 also uses Goophone’s customized Android to mimic Samsung’s own.

• The Goophone Note 3 measures 5.95 x 3.12 x 0.33 inches and comes in white and black
• The design of the N3 is a pretty faithful copy of the Galaxy Note 3. If you liked the feel and size of the Note 3, you won’t find anything to complain about in the N3.
• The back cover is made of a textured material that is similar to leather and is removable. Removing the back cover reveals a removable battery and three card slots, two for regular SIM cards and one for a microSD.
• The N3 mimics the button layout of the Note 3. The volume rocker is on the left side and the power button is on the rights.
• The bottom of the N3 is where you can find a speaker grill and a microUSB charge port. It’s also where you can find a “fake” S pen.
• The front of the N3, at the bottom bezel, has the home button which is flanked by the menu and back button.
• The N3 feels light in your hand even if it is physically big. It won’t slip out of your hand. 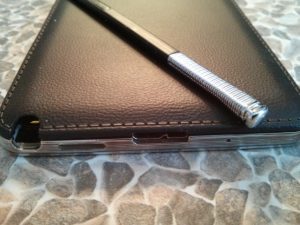 • The display of the Goophone Note 3 is a 5.7-inch IPS that has a resolution of 1280 x 720.
• While the N3 display looks like that on the Galaxy Note 3, the resolution and quality aren’t the same.
• The IPS display resolution is good enough though for daily usage. It’s only if you’re used to full HD or AMOLED displays that you will find the N3 display lacking.
• It is rather hard to read the display in direct sunlight and the large screen isn’t exactly conducive to one-hand use.

• The N3’s processing package is not the most powerful, but it provides a reasonable standard of performance.
• The N3 uses a MediaTek MTK6589 which has a quad-core CPU (Coretx-A7). This is backed by a PowerVR SGX 544MP GPU.
• These two provide power to make the N3’s UI operate fluidly and smoothly.
• The device also handles gaming well.
• The N3 has an AnTuTu score of 13,737
• The N3 has an Epic Citadel score of 46.5 frames per second on High Performance more. On High-Quality mode it scores 45.6 in High-Quality mode.
• The N3 has 8 GB of internal storage and you can expand this using the microSD slot.
• The call quality of the N3 is good and the calls are clear when in full volume.
• The speaker, which is located on the bottom of the phone is adequate for gaming and watching media.
• The N3 has the standard connectivity options such as Wi-Fi, Bluetooth, 2G GSM and 3G. There is not NFC and it doesn’t support LTE, two things which the Galaxy Note 3 does.
• On 3G, the N3 only supports 850 and 2100 MHz. The latter is the standard frequency and should allow the phone to work in most places – except for the US.
• The GPS can take a while to get a lock, about 6 minutes, but it gets a position reading quickly.

• The N3 has a battery that is made to look like that of Samsungs. The battery claims to be 3200 mAh but it is actually a 2880 mAh unit.
• Tests show that the device will work for 3 and a half hours of 3D gaming;40 hours of music listening; 5 hours of film viewing; and 7 hours of talk time using 3G.

• The Goophone Note 3 has a 13 MP rear camera with a LED flash and a 5MP front camera
• The camera app mimics a standard open source Android camera app. This means you get standard features such as face recognition and smile detection as well as HDR and panorama.
• Shots take using these cameras are good but not particularly sharp or vibrant. The color range is good.

• The Goophone N3 have mimicked the S Pen of the Samsung Galaxy Note 3 as well as Samsung’s Touchwiz interface.
• Pulling out the N3’s pen launches S Note, allows you to visit the photo gallery, take screenshots, search via Google Now, or use the Pen Window. 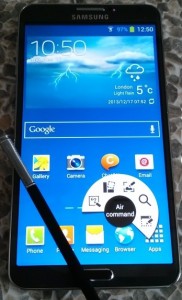 • The S Note is a good note-taking app. Using your finger or the pen, you can add text and photos to your note.
• To make the Pen Window work, you draw a rectangle on-screen. The N3 then offers a list of apps that you can launch. This includes Calculator, Phone, Messaging, Clock, Calander, Browser, Settings and ChatOn.
• The N3 also mimics other Note 3 software features like Smart Pause, Smart Scroll, and Air Gestures. Unfortunately, these don’t really work that well.

• The Goophone N3 is not readily available from carriers and you can’t get it on contract.
• You can buy the Goophone N3 from China and from a few online auction sites for $199 plus delivery and import taxes.

The Goophone Note 3 is a very good copy of the Samsung Galaxy Note 3. There are several models of the Goophone Note 3 which have different amounts of internal storage. It also seems like Goophone will be coming up with a version of the Note 3 that will have an MT6592 processor. Make sure that the version you do get has the specs you want.

What do you think about the Goophone Note 3?
JR 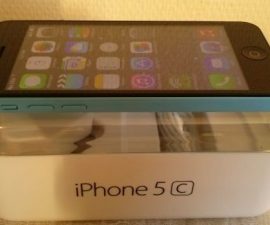